Holi, the Indian festival of colours is quite a one-of-its-kind festival, commemorating both the destruction of Holika, as well as the burning of Manmatha, symbolising desire/lust. Read more on the mythology on wikipedia: http://en.wikipedia.org/wiki/Holi

However, the colour-throwing, as fun as it may be, has often been quite a nuisance, since a lot of people are quite paranoid about the synthetic colours, their adverse effects on the skin/eyes, leave alone merely getting very very dirty! A lot of hooliganistic behaviour has often been seen in various cities, Delhi I think, being particularly notorious, and Bombay too, uncharacteristically.

Even in an elite place like IISc, there is too much of hooliganism to believe or bear. The messes were messed up, as were several corridors. And after all this, this was probably the cleanest of the last three Holi’s I have seen here. The first one was a veritable disaster with colourful handprints on the brand new hostel’s walls. The next time, not even departments were spared, with colour strewn all over. This time, being a working day, the damage was contained I should guess. People walking into messes with colours strewn all over is never an endearing sight, more so if they take food — from the perspective of everyone’s health and hygiene! — dirtying chairs and the food alike.
The bottomline is that the celebration of the victory over the Asuras, of Prahlada being saved is celebrated indeed in Asura fashion. Some serious soul-searching needs to be done by these people. No one objects to peaceful enjoyment. Why drag in someone who is not interested? (Curiously, I say all this even though I’ve had to suffer nothing!) Why is there a failure to merely respect each other’s preferences?

Got this amazing picture from http://www.krishna.se/Art/ganga_descent.html. Can’t praise the artist enough! What a beauty this pic is! 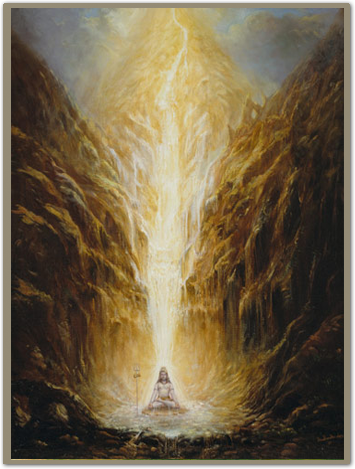 The painting shows an artist’s rendition of how Ganga, when She deigned to come down to Earth from Heaven, was received by Lord Shiva. The story of Bhagiratha’s penances and the famous phrase Bhagiratha Prayatnam are wonderful to read about. Shiva is said to have locked up the arrogant Ganga in his locks, until further prayers and penance from Bhagiratha would see her through, but not before further being consumed (and then released, once again on Bhagiratha’s prayers) by the rishi Jahnu, which earned Her the appellation Jaahnavi.
Also see the wikipedia entry on Ganga.

Lots been said and written about ancient India’s expertise in various fields of science and technology. Possibly there are some references to the same in Erich von Daniken’s “Chariots of the Gods?” too.

Came across this wonderful page which deals with a lot of these things in great detail: http://www.atributetohinduism.com/Vimanas.htm. Pretty interesting..

Just goes to say that we’re still going to only rediscover a lot of stuff lost during our transition to the modern [sic] era, not invent!